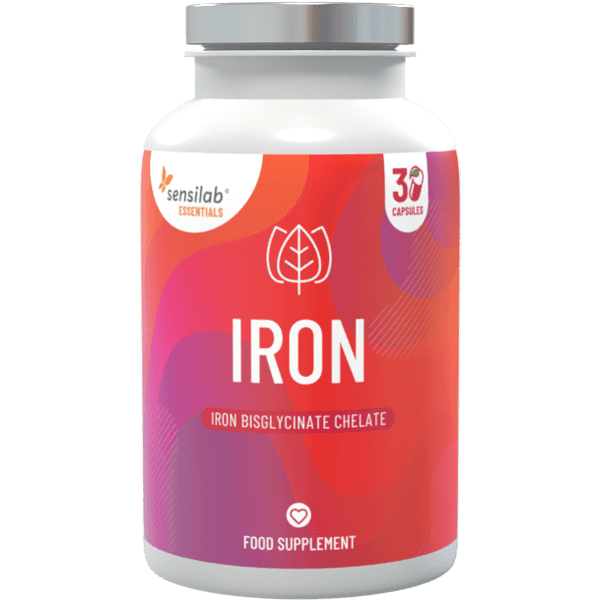 A brand new, highly potent iron supplement with 40 mg of iron in chelated form and 80 mg of vitamin C. With superior absorption and no metallic after-taste!

Common forms of iron supplements (iron sulfate, iron citrate) come with some unwanted side effects and problems, like:

Our premium high-potency formula contains 40 mg of iron which represents 286% of your daily needs.

Compared to other forms of iron, iron bisglycinate does not dissolve in the gut, meaning it is less irritating to the digestive tract! So side effects are extremely rare.

Sensilab Essentials Iron also contains vitamin C in the form of calcium ascorbate, a non-acidic, stomach-friendly form of vitamin C that increases iron absorption and contributes to better function of the immune and nervous systems, while helping you fight tiredness and fatigue.

Foods like cereals (including bread), meat, fish, legumes, vegetables and fruit are our main sources of iron. However, iron absorption is inhibited by phytic acid and polyphenols (in plant-based food), calcium and some milk and egg proteins, meaning not all iron gets absorbed and used. So we don’t necessarily get enough iron even through a healthy and varied diet.

In fact, almost 25% of the global population suffers from iron deficiency-related anaemia. Anaemia is the most widespread nutritional deficiency in the world and the only one still prevalent in industrialised countries.

The minimum recommended daily intake for iron is 14 mg, which can be consumed by eating:

Iron deficiency develops gradually over time and usually arises when:

The most common symptoms of iron deficiency include:

Who needs an iron supplement?

Groups with the highest risk of developing iron deficiency and anaemia, and people who could highly benefit from taking 40 mg of iron a day are:

Menstruating women – women of childbearing age, especially during their periods are more prone to a reduced number of blood cells, feeling fatigued and having a decreased mental and physical performance (reduced work capacity).

Teenagers – due to rapid growth spurs, anaemia is common in growing children and especially teenagers.

People over the age of 60 – older age is often associated with poor nutrition and a higher risk of inadequate iron intake that can lead to anaemia.

Vegans and vegetarians – as iron from plant sources has a lower bioavailability and vegan or vegetarian diet is rich in iron absorption inhibitors, supplementing can be vital.

People with GI issues – poor iron absorption or gastrointestinal bleeding can cause iron deficiencies in people with celiac disease, IBS or IBD.

The recommended daily intake is 1 capsule.

Ferrochel® is a trademark of Albion Laboratories Inc.

Recommended daily intake is 1 capsule with a glass of water after a meal.

If you are hypersensitive or allergic to any of the ingredients of this product or use medication consult your doctor before use.

Keep out of reach of children! Store in a dark and dry place at a temperature below 25°C.